“Eat a live frog first thing in the morning and nothing worse will happen to you the rest of the day.” ~ Mark Twain

Aside from being somewhat offensive to those who actually consider frogs to be a delicacy (see US president Obama), Mark Twain does have a good point, in the figurative sense. 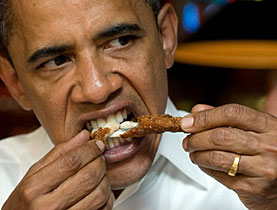 Of course, there’s only so much of your day you can control. Something completely unpleasant can happen to you at any point during the day. You don’t always have a say. But one area that you do have control over is the way you manage your tasks.

This concept was popularized by Brian Tracy in his book Eat That Frog! 21 Great Ways to Stop Procrastinating and Get More Done in Less Time.

So let’s dissect the frog to see its impact on task management.

What is the frog?

The frog is the most important task. It’s also the one that you are most likely to procrastinate because it puts pressure on you. It’s the task that you know is there, but you don’t want to face.

Coincidentally, the frog is also a task that you should be focusing on, because it will get you closest to your goals.

It’s the task that sits in the not urgent/important grid of the Eisenhower Matrix, waiting for you to get around to it after you’re finished with all that busy work.

What does first mean?

But there are also many people for whom mornings are their least productive times. You should eat the frog when your energy level is at its highest for the day. This might be at night when everything has settled down and everyone’s gone to sleep, right after your lunch, at the break of dawn, or anywhere in between.

For people who work 9 to 5, eating the frog at work might need to happen in the morning, before their day is interrupted by co-workers and meetings.

Now, the idea of eating the frog first is that it’s not pleasant. So don’t wait around for the time when you “feel” like doing the task. That time will never come, because, hey - it’s a frog. You’re not supposed to like it. Just close your eyes and eat it.

Why eat the frog?

If everything is important, then nothing is.

When two tasks (or more) are given the same importance, your brain will choose to do the easiest one.

Let’s say you have “write a blog post” and “write an email” sitting side by side. Which one do you think you’ll choose to do first? You’re probably going to choose to write the email because it’s a lot easier. You'll rationalize it by saying that it will take less time, it will be on your mind unless you get it done, etc.

Now imagine when you have 10 busy work tasks like “write an email” on the same level of importance as writing a blog post. You can see how the harder task will just slide down at the bottom of the list.

Eating the frog makes you prioritize which task is actually of value to you. It kind of forces you to face what you’d otherwise be hiding from. It also forces you to get on things ASAP, so that the chance for chronic procrastination radically decreases.

How to eat the frog

If you don’t already find frogs a delicatessen, then you will have some trouble eating it, no matter how much you try to rationalize that it’s good for you.

Here are some quick tips on how to eat the frog so it’s not that unpleasant.

Don’t contemplate it too long

If you stare at the frog too long, you’ll get intimidated and back down. You’ll find reasons to procrastinate. Just go for it. Don’t think about how it might feel, what might make it unpleasant, or what you’ll do if a piece gets stuck in your teeth. Just get it done.

Prepare your frog the day before

After eating the frog a few times, you will find that it’s not that bad at all. You will get the satisfaction of completing a task without having had procrastinated, and you will be knocking down your goals one at a time.

What’s your frog? We’d love to hear what’s the task that you’re most likely to procrastinate. Let us know in the comments below.