How many times have you said “I’m too busy for a hobby”? You probably claim you’re too dedicated to your career. But to improve performance at work, you should find a hobby.

Above all, hobbies have scientific benefits. Try these ones, or find similar activities, to improve performance at work.

Recover from burn-out by golfing

Burn-out from a heavy workload hurts your productivity and happiness. It’s often hard to stay motivated when too many projects are sitting on your desk. Having a hobby fights this feeling because mental recovery is a proven benefit. Earlier this year, psychologist Kevin Eschleman measured the effects of starting hobbies on more than 400 people. Outside of work, people quickly relax. At work, they feel a greater sense of control over their tasks. This is partly because having a hobby disconnects you from the office and puts you in a stress-free environment to mentally recover from a hard day.

Mental recovery can also involve laughter. Laughing releases dopamine, the brain’s chemical that makes you happy. That’s why, above all, you should have fun with any hobby. You won’t reap all the benefits of mental recovery if you stay frustrated after work. 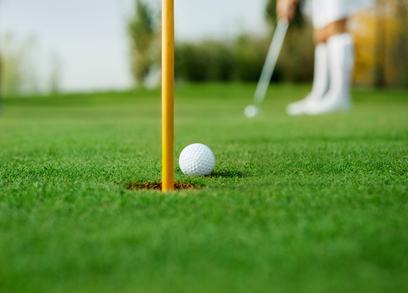 Golf has these benefits, which many other sports don’t have. This is largely because of its leisurely pace, as playing 18 holes takes up to five hours. Those five hours are spent having fun. By playing with a group, you enjoy the company of other interested people. You concentrate on getting the best shot and beating them, not about finishing a report. Plus, you’ll probably have a few laughs. No wonder golf is so popular.

Exercise has other benefits that make you a better team member. For example, it stops you from feeling anxious. This is because it prevents brain cells that cause anxiety from firing, according to a 2013 study by Princeton University researchers. Of course, you can improve performance at work by staying calm. By getting more work done, burn-out won’t hit you as hard.

Increase intelligence by learning an instrument

Many hobbies exercise your brain by providing stimulating tasks. But this isn’t the only way they make you smarter. Business education scholars at Singapore Management University explain how extra-curricular activities make students smarter. This happens in two ways. First, they develop skills and characteristics that lead to a strong work ethic by perusing a goal in which they’re genuinely interested. These traits include discipline, perseverance and high self-esteem.

Second, it helps people build relationships with those who share similar interests. This encourages them to have detailed, informed discussions. As a result, they practice critical thinking. Though this research doesn’t directly discuss adult hobbyists, it’s easy to see how having a hobby has the same benefits.

Golf illustrates these benefits, too. You probably discuss, in detail, how to take a shot while thinking critically about how to do so. You also improve your work ethic by trying to beat previous scores.

Playing music boosts intelligence in the traditional sense – by exercising your brain. It’s no secret that learning an instrument benefits kids. But playing an instrument is good for adults, too. Swiss psychologist Lutz Jäncke showed this in a 2009 study. Musicians have superior neuroplasticity, which means their brains quickly process new information. Playing music also exercises parts of the brain that control alertness and planning. Overall, learning an instrument can increase IQ by seven points. People quickly gain these benefits. Jäncke notes that seniors who learn an instrument notice improvements after about five months.

If you work in a creative industry, it’s important to think outside the box. But a dose of creativity never hurt anyone. That’s why many businesses use Google’s famous 20% rule. It led to the creation of Gmail and lets team members use a fifth of their time to explore side projects. The fun 20% also leads to a productive 80%. Though Google stopped the policy last year, many insist it isn’t dead.

Eschleman touches on why having hobbies and side projects boosts workplace creativity. Quite simply, you need to practice being creative. That’s why people with hobbies find ways to be creative at work. Creativity benefits more than one person, too. Participants with creative hobbies are more likely to help teammates. To encourage creativity, some companies have people play games and competitions. This can be expensive for small businesses. Instead, Eschelman suggests managers simply encourage team members to find a hobby.

One of these hobbies is chess. It involves intense strategic thought. Players must monitor more than the piece they want to move. They analyze every piece, calculating potential plays. Often, this involves determining an opponent’s moves three or four turns in advance. Because of this, a creative play that most people wouldn’t predict is what wins most games. Exercise creative thinking with chess and bring the benefits into the office.

Playing chess, golf and instruments are hobbies that bring you professional benefits. But there are other activities you can do outside of work that yield similar results. Find something you love that counters burn-out, challenges your mind and forces you to be creative. You’ll not only be a better team member, but have more fun outside the office.