In the previous blog post I talked about the qualities that take a team from good to great. One of these qualities is emotional intelligence.

"the subset of social intelligence that involves the ability to monitor one's own and others' feelings and emotions, to discriminate among them and to use this information to guide one's thinking and actions.”

They initially created this interesting diagram in trying to conceptualize emotional intelligence. 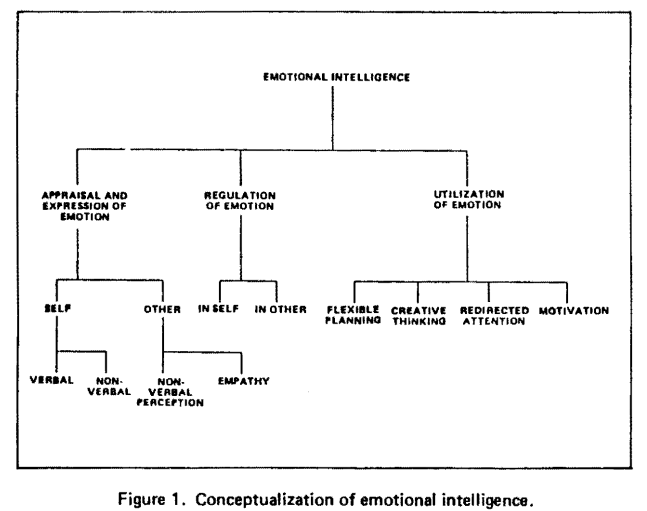 In their subsequent research, Salovey and Mayer identified four branches of emotional intelligence.

These are as follows:

Perception and expression of emotion

The last branch is a key part of emotional intelligence. This refers to being able to stay open to emotions, both pleasant and unpleasant, recognize whether they are reasonable or not, and manage them by moderating negative emotions and enhancing positive ones.

Is EQ more important than IQ?

Many would argue that yes, emotional intelligence is more important than IQ. And there are studies that might support this claim. But one thing we can be certain about is that EQ is extremely important, both in work and personal relationships.

Salovey and Mayer suggest that moods and emotions influence our problem solving strategies. They also point out that positive emotion can alter memory organization, which results in the ability to see diverse ideas as related - a boost in creativity. Also, moods of anxiety and depression can direct attention toward the self, whereas positive moods direct attention outward. You can see that EQ becomes important in how we manage our emotions.

Instead, social sensitivity - the ability to understand the feelings and thoughts of others, part of emotional intelligence - was the most important factor that influenced the overall group performance.

It seems IQ alone is simply not enough.

How to boost emotional intelligence

Whether you're looking to boost emotional intelligence or you already have a high EQ, there are always things to be mindful of.

1. Give people the benefit of the doubt

"A negative look from someone else may mean nothing more than they're constipated!" ~Daniel Amen

Each person is fighting her own battle. You don’t know why certain people react the way they do. And no matter how offensive you might find their actions, you need to first understand why they do the things they do.

Don’t assume that they’re just acting a certain way because they have something against you, or because they don’t respect you. The best way to find out is to be direct and ask about it. Which takes us to the next point.

2. Make all statements about your feelings

Instead of making your statements about blaming the other person, for example “You never do this” or “You always do that,” make them about your own feelings. Express how you feel, followed by what causes you to feel that way. For example, “I feel like I don’t matter in this company when you don’t give my suggestions a fair try.”

Oh, and always avoid general statements like “always” and “never”.

There’s nothing wrong with asking someone why they’re acting the way they are. Seek clarification when needed. This goes hand in hand with giving people the benefit of the doubt. Try to ask open ended questions - “I’m curious, why did you…?” Don’t judge or accuse, even if your suspicions are confirmed. Check the words against the body language, to see if language and behaviour align.

How do you react to stress? Do you snap at others? Do you blame people? Do you get in yelling matches? Or do you sulk in silence?

Pay attention to how you react to stress. This will give you a good indication of your level of emotional intelligence, and things that you can do to improve how you interact with others.

5. Control your own negative thoughts

This is perhaps one of the most important aspects of emotional intelligence: the ability to manage negative emotions. Negative emotions overwhelm us and affect the way we think. Although we all experience some degree of stress daily, how we handle our reactions to this stress makes all the difference.

If you become overwhelmed by negative thoughts, try to remove yourself from that environment, take a deep breath and a moment to recenter. It’s better than doing or saying something that you might regret later.

Do you want to test your emotional intelligence? You might enjoy this quiz.

How important is emotional intelligence when you are hiring? Let us know in the comments below.