By now, we know what kind of behaviours demotivate people at work.

But what does motivate workers?

Of course, each person is fuelled by their own dreams and ambitions, but taking a close look at the complex relationship between happiness and motivation might give us a hint at what drives people to do their best work.

There is enough evidence, by now, to believe that happy people are more productive. In fact, a Gallup-Healthways study estimates that unhappiness among workers in the U.S. is costing a whopping $300 billion per year in lost productivity.

A series of studies by Andrew J. Oswald and his team also provide evidence that happiness positively impacts productivity. In one experiment, subjects have their happiness levels increased by being shown a clip of comedy routines. The subjects who had watched the comedy clip showed 12% greater productivity than those who had watched a ‘placebo clip’.

A second study by the same group of scientists took a look at major, real-life unhappiness shocks such as bereavement and family illness and how they impact productivity. In this study, a random group of subjects was given a questionnaire about their happiness level and possible negative life events. Then they performed the same tasks as the subjects in the previous experiment. It turns out that having had a bad life event in the previous two years lowers people’s performance by approximately 10%.

The effect of autonomy on well-being and motivation

One reason that might explain why happy people are more productive might be that people recognize changes in their energy levels not only as a function of physical states (illness, fatigue, etc.), but also as a function of psychological factors.

Simply put, people are happy when they subjectively believe themselves to be happy.

Ryan and Frederick argue that subjective vitality is enhanced when the basic psychological needs for autonomy, competence and relatedness are satisfied. They especially emphasize the role of autonomy on energy levels - when the behaviour comes from one’s self, as opposed to being demanded to think or behave in a certain way by someone else. While autonomous behaviour can maintain or enhance levels of energy, controlled behaviour feels like a drain on personal energy.

In one study, Ryan and Frederick found that when samples from both a pain and a weight-loss clinic reported more controlled reasons for being in treatment, they showed less vitality than than those who had autonomous reasons for participating.

This shows that intrinsic motivation increases the level of subjective vitality, or our perceived energy level. Autonomy can thus foster feelings of energy and well-being. So if you want higher energy levels from your team members, make sure to give them autonomy over their own tasks.

How positive emotion affects the day to day workplace

Happiness and positive interactions can have a great impact on daily productivity in the office. It affects aspects of the workplace that contribute to overall satisfaction, and that will in turn contribute to the motivation and discretionary effort of the team members.

One study from the Haas School of Business at UC Berkeley shows that expressing positive emotion at work radiates into three different areas.

First, there is a positive effect on the happy team member, regardless of her relationship to others. This is materialized in greater task persistence and enhanced cognitive functioning.

Lastly, the person who is experiencing positive emotions is more likely to have a positive response to other team members, such as extending help to others. 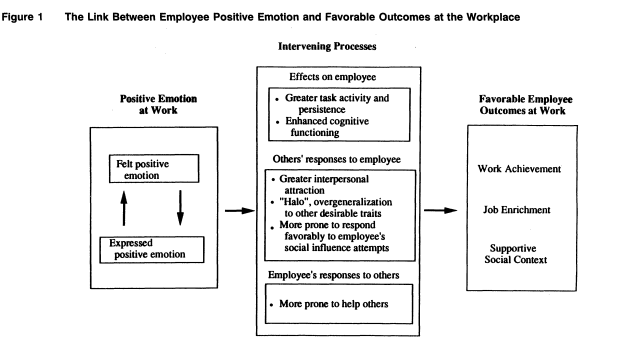 So not only are happy team members more productive, but their happiness also has positive outcomes for other workers as well.

What’s more, positive emotion increases optimism and perceived control. While sometimes this might warrant inaccurate beliefs about the future, the mere anticipation of success will increase task persistence. If people believe there will be a positive outcome, they are more likely to stick with the task when things get hard.

There’s something to be said for those workers who might not be so cheerful. People are generally bad at planning. Our cognitive biases, self-serving attributions and illusions of control make us overestimate the outcome of our actions.

Not necessarily so with more sombre workers. Depressed people usually have less self-serving biases and can give more accurate performance feedback, both on their own work and on the work of others. They are also more likely to accurately perceive their levels of control. This phenomenon is called ‘depressive realism’.

It doesn’t mean that people who aren’t happy can’t work well. Indeed, our happiness level might fluctuate throughout the day. However, people who are less satisfied with life might lose points when it comes to how others perceive them and how they respond to the needs of others.

In the end, motivation and productivity don’t depend as much on happiness as they do on positive thinking. Positive thinking will keep you glued to the task at hand when the going gets hard, and anticipation of success is likely to bring about success.

So go ahead and daydream about what success looks like. Chances are, you will bring it within reach.

Do you feel more motivated when you're happy? Let us know in the comment section below!