The Pareto principle was named after the man who discovered it, Vilferdo Pareto (1848-1923), an Italian economist and sociologist. He first observed the 80/20 rule when researching and analyzing wealth and income distribution trends in Europe. He noted that broadly 20% of the people owned 80% of the wealth. He also then realized that this ‘predictable imbalance’ can be extended to illustrate that, for example, 10% would own 63% of the wealth, and 5% would own 40% of the wealth. Mathematically, the 80-20 rule represents an example of a power law distribution (also known as a Pareto distribution) for a particular set of parameters. 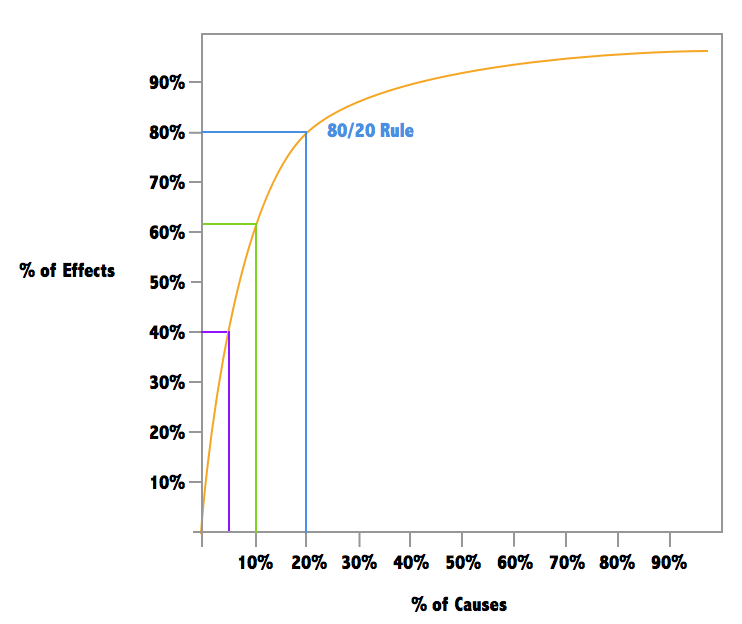 Other phenomena that have been observed to follow this distribution, follow it roughly. So when mapping it to other fields instead of worrying about the exact numbers, the rule is most useful to us if we think of it as a simple rule of thumb to remind us that there is an inequality in distribution between cause and effect. We can use it as a reminder to focus on the 20% that makes the most difference.

How to use the 80/20 rule to boost workplace productivity

In workplace productivity the distribution is noted in the amount of effort we put towards our goals: the first 20% of your time yields 80% of the results. And then you spend another 80% on the remaining 20%. For example, it might take a team 2 days to create a working webpage. It seems they are almost done, but then it takes them another 8 days to finish it off. They run into bugs to fix; polishing the design and copy takes more time than expected, testing it across browsers and devices may surface more bugs to fix, etc.

The significance of this rule for project management is that the beginning of a project moves faster than the final stretch. So how do we use this knowledge to our advantage? Here are a few tips.

Remember to give feedback early and pivot early

Since the last stretch takes more time than the first, it’s wise to get feedback early so you can adjust and evolve your work early before you invest too much time into it. The ability to change requirements midway through a project has been invaluable to many modern fields like software, marketing, design, etc. Throughout the lifetime of the project you can analyze and measure the results, learn from them, and evolve your plan. This way instead of completing your project to initial requirements, you build it to the best way it can be.

There are several ways in which you can gather early feedback. One way is through collaboration with your customer; you work together to steer the project in the right direction. At times when you can’t show early work to a customer you can use the 30% feedback rule to get feedback from your co-workers. Another common way is through data driven analytics. For example: you can analyze the behaviour of the traffic to your site and adjust your site accordingly.

Keeping the 80/20 rule in mind will encourage you to solicit feedback early and often, so you steer the direction of your work before investing too much time in it.

Know when to call it done

The first 20% of the effort brings 80% of the results, the second 20% bring another 10%, the third 20% bring 3%, and the distribution continues. The farther you are in a project the less of the results it brings, so know when to stop. If you’re a perfectionist you might be tempted to keep working on a project forever, but that’s not the most productive use of your time!

Have you used the 80/20 rule to boost your productivity? Share with us how in the comments below!