Edward de Bono once said, “you cannot dig a hole in a different place by digging the same hole deeper.”

Yet this is often what companies end up doing. In business as in medicine, law, or academia, you need to constantly innovate to stay ahead. It’s not enough to work harder, or log more hours, or hire more employees: you need to work smarter, not harder.

And the key to this is innovation. Fostering an innovative, creative mindset in our workplaces is a crucial component of success. Yet often, instead of venturing into the unfamiliar, we get caught up in routines, resist change, and religiously stick to the established rules. When this happens, we slowly start to fall behind.

What we need to do is inject our work with lateral thinking.

So what’s the deal with lateral thinking?

Lateral thinking is a concept Edward de Bono developed to avoid the vicious circle of “digging the same hole deeper.” Lateral thinking proposes that by disrupting our usual thought process, which is traditionally linear and guided by logic and rationale, we are able to reach creative solutions that revolutionize the way we work. It stimulates our creativity and channels it into productive outlets.

[Tweet "Creativity isn't something innate, it's a skill. Everybody can learn how to be creative."]

When we’re confronted by a problem, most of us try to figure out how to get from point A to point B. However, lateral thinking is about realizing that there’s a point C, about approaching the problem in a different way. By challenging traditional thinking, new spheres of perception are opened up.

Imagine you have a different colour hat for different ways of thinking: black is for judgement, red is for feelings, white is for information and objectivity, yellow is for optimism, et cetera. The six hat technique is about approaching one problem with all six modes of thinking, one after the other. 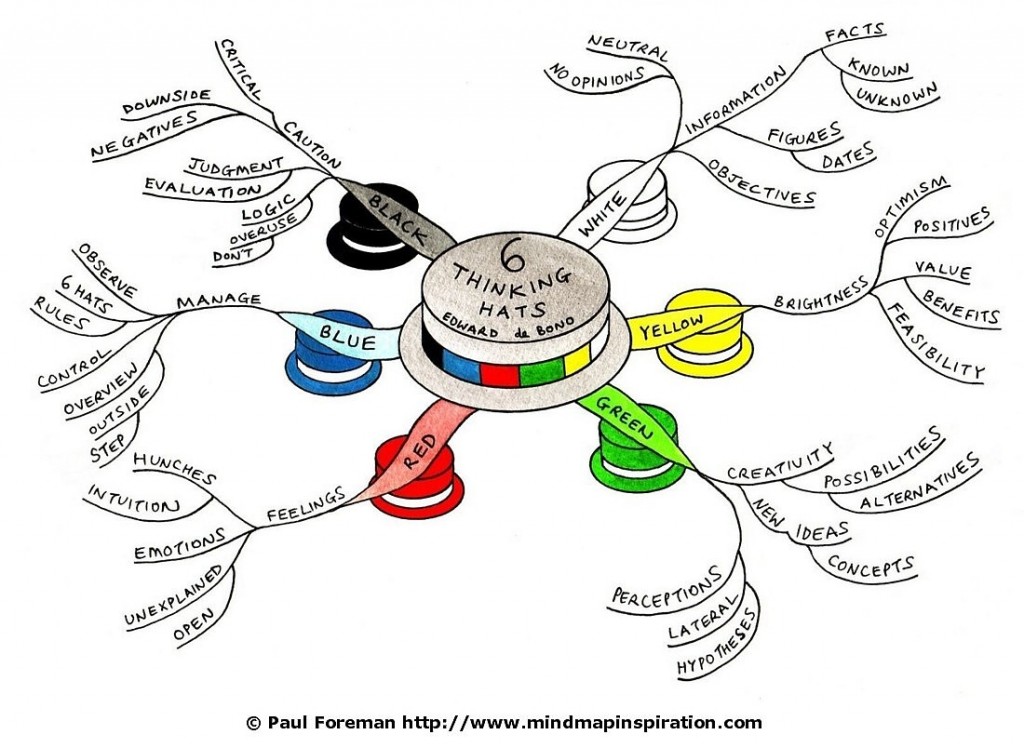 Paul Sloane, together with Edward de Bono, is one of the two names often associated with the concept of lateral thinking. Sloane is a leading expert on lateral thinking, a successful leadership keynote speaker and the author of several books.

Sloane’s observations of the life of most professionals is that their work is driven by interruptions. Many are dealing with multiple crises at once, are in constant communication with coworkers and customers, and jump from one thing to another at an ever faster pace. In this hectic environment, it is especially important to sit back and take the time to think deeply about problems.

Not only that, it’s crucial to share observations with your team. When all of a sudden you have a moment of clarity about a problem you’ve been grappling with, it can be easy to forget that what’s clear to you is still a muddled mess to others. Letting your coworkers in on your cool insights and spreading innovative ideas is an effective way of stimulating creativity in others.

At the end of the day, Paul Sloane answers the question “is there a better way to do what we’re doing?” with “yes” - always. Even if you don’t know what the better way is yet it always exists. You just need to find it.

So many successful products were created because its creators dared to challenge assumptions about what customers wanted. Jeff Bezos asked, “is there a better way to sell books than through bookstores?” and founded Amazon. Michael Dell asked, “is there a better way to sell PCs than through dealers and retailers?” and became the CEO of a company employing more than 100,000 people. Starbucks thought, “why don’t we sell a cup of coffee for five dollars?” when everybody else thought they’d only be successful by driving down costs.

For Paul Sloane, lateral thinking is about believing everything is up for grabs. The conventional approach to how companies become successful is not the only approach. In fact, sticking with the conventional means you’re at risk of being outcompeted by firms more willing to innovate. “The status quo is a very dangerous place to be.”

The idea of stimulating creativity by examining something from a new perspective is one that’s been around for a long time.

Viktor Shklovsky, an esteemed literary theorist and a key figure in the Formalist movement, believed that thoughtful perception and new ways of thinking could only emerge when we look at something in a new light. The process of examining something familiar from a new angle is one he called the process of ostranenie - translated as estrangement. He outlined his theory of estrangement in “Art as Device”, an essay published in 1925.

Estrangement is a way of revitalizing our thought process. By making something familiar seem foreign, we pause upon an object that we otherwise wouldn’t give a second glance. By making us slow down and contemplate a problem, estrangement lets us examine things in a much more thorough and inquisitive way. Estrangement provokes meaningful thought.

There are many techniques we can use to put estrangement into practice. For example, we can transplant ourselves into an unfamiliar environment; think of an existing parallel scenario and look at what solutions were found there; or look at a problem from a new angle (for example by using de Bono’s six hat technique).

To use Shklovsky’s language, de Bono’s concept of lateral thinking is all about estranging ourselves from the problem at hand and by doing so, allowing for alternative perceptions. This kind of slow, deliberate, thoughtful contemplation lets us see past conventional solutions and think of ones that are truly innovative.

For de Bono, this is the key to success. Better quality and service are not enough to get ahead. Instead, “creativity and innovation are the only engines that will drive lasting success.”

Do you encourage creativity and innovation in your workplace? Does your daily routine include more linear thinking or more lateral thinking? Share your thoughts and experiences in the comment section below.